Another private equity firm is buying a long-held Portland institution – it’s deja-voodoo all over again! The Portland Business Journal and Eater PDX, Portland’s brilliant food blog, broke the news that Fundamental Capital, a San Francisco private equity firm, purchased a significant stake in Voodoo Doughnut, the Portland bakery known for its… unique… doughnuts. Let’s sprinkle some backstory of Voodoo Doughnuts and not glaze over what this deal means to the future of this Portland icon.

Baking up the Weird – The History of Voodoo Doughnut

Although Voodoo Doughnut has become a tradition for tourists (and locals) to consume over the years, the bakery hasn’t been around as long as some may think. Owners Kenneth “Cat Daddy” Pogson and Tres Shannon only opened the first store in Old Town back in 2003. Since then, the duo opened other locations in Portland as well as Eugene, Oregon; Denver, Colorado; Austin, Texas; Universal City, California; and even as far-flung as Taipei, Taiwan. 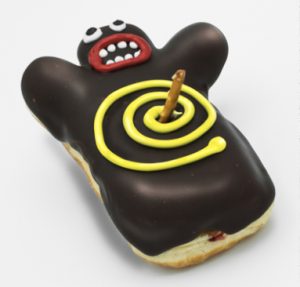 Pogson and Shannon got their start in Stumptown both in the music industry and bar scene by running the X-ray Cafe, a music venue. When the two started Voodoo Doughnut, neither of them had made doughnuts before. They researched by visiting Los Angeles and training with veteran doughnut makers to learn the secrets of baking up little slices of heart-attack heaven. Shannon had developed a reputation for supporting the alternative “counterculture” movement in Portland, so when the pair decided to start making doughnuts, naturally they wouldn’t be your standard slices of heaven with menu items featuring real bacon and local beer such as Rogue Ale, while also sporting odd themes like the titular dessert shaped like a voodoo doll with a pretzel stick through its heart, or one of the more notorious favors, the ol’ Cock-N-Balls which is cream-filled, naturally. 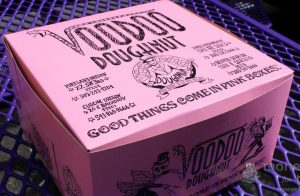 Being masters of marketing and playing to the non-traditional, the doughnuts aren’t the only naughty bits at the bakery. Voodoo’s motto, “The Magic is in the Hole” is filled with double-entendre while buying batches of Voodoo Doughnuts also earns you the iconic pink box emblazoned with the not-so-subtle catch-phrase “Good Things Come in Pink Boxes.” Voodoo’s not been exempt from true controversy, either. The bakery featured a special Tex-Ass Doughnut challenge where buyers could attempt to eat the Tex-Ass Doughnut, equivalent to a six-pack of regular-sized doughnuts, in less than 80 seconds in order to win a special button and get their money back. A 42-year old man died earlier in 2017 when he started choking in Voodoo’s Denver location trying to make it happen.

The Secret Recipe of Selling Out

The news of Fundamental Capital’s “partnership” with Voodoo Doughnut broke on September 29, 2017 with an exclusive in the Portland Business Journal. Although details of the deal were not disclosed, the co-founders state that the infusion of cash and guidance will allow the Portland icon to expand locations and claim they will retain ownership and influence over the company. “Now, it’s about getting together and planning that growth,” Tres Shannon told PBJ. “We don’t want to rush it and make anything too fast; we will do it thoughtfully so the brand grows nice.”

Private equity firms buying up local Portland businesses is nothing new. Stumptown Coffee Roasters got snapped up back in 2011 and Boyd Coffee got grabbed earlier in 2017. Plus, there’s no question that Fred Armisen and Carrie Brownstein’s Portlandia television series certainly put Portland more on the map than it ever had been before. Infusions of cash will help businesses grow and attention helps provide opportunity, but will weirdness pull out of Portland? Leave your crumbs in the comments!