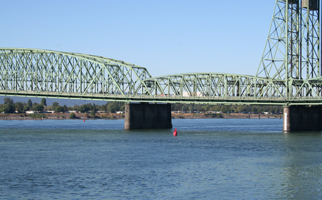 Despite I-5 being an interstate (usually at least partially covered by the Federal system), a lot of the expense behind the upkeep and maintenance of our interstate freeway system falls on the states. Usually, this isn’t a problem where the state in which the maintenance happens to reside simply foots the bill.

Ah, you might ask, what happens when the part of the freeway is a bridge? A complex bridge that, in addition to being multiple lanes is also a drawbridge? And it’s located between two states? And those two states are in huge tax problems because one doesn’t have a sales tax and the other doesn’t have an income tax?

So, we started wondering: how about we just tear down the I-5 bridge, set up a few catapults in its place, and then launch the governors, the city councils and anyone else involved deep into the heart of the Columbia to resolve their differences?

Got a better idea? Leave it in the comments.

Source: Governors: Build a truss bridge to replace I-5 span