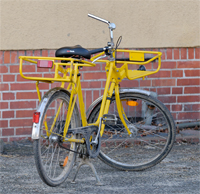 What is it about bicycles that makes Portlanders love them so much? Nearly 6% of our commuters do so by bike, more than any other city in the survey. Sure, we have our city leaders to thank for the miles and miles of bike lanes, parking areas and all the support – but, seriously, maybe you didn’t notice, but it rains here. A lot. Bicycles aren’t the most weather-friendly transportation on the planet.

Portlandia (and much of the rest of the world) would have you believe that Portlanders love bicycles because we’re all nutty as fruitcakes. While the fact that we’re all a little off our rockers may be true, we don’t think this is the reason for our two-wheeled love affair. In addition to being huge amounts of fun (who doesn’t like a souped-up cruiser with flames running down its sides?), bicycles are some of the most environmentally-sound vehicles on the planet, and Portlanders love their outdoor activities.

Regardless of the reason, Portland’s #1 with bicyclists and we want it to stay that way. In case you’re interested, our favorite Portland bicycle blog, BikePortland.org, has the report in its entirety (source article linked below).

What’s your favorite type of bicycle? Or event? Portland has so much to offer bicyclists, we’d love to hear what your favorite bicycling thing is!