The Hilt Bar, located on NE Alberta, perfectly demonstrates what makes Portland so great; the exterior nearly screams boring and dull while the reality held just inside is astounding. The Hilt is a jewel in the rough with a mind-blowing happy hour menu, a wide selection of tasty beer and a truly laid-back atmosphere.

Walking on Alberta St. will introduce you to Portland’s predominate, up-and-coming Northeast neighborhood (aptly named Alberta much in the same way the Mississippi neighborhood is named after its main street, too).

Restaurants and bars dot the street on both sides, and you’ll be bombarded with a variety of wonderful places to shop and eat. You might miss the almost nondescript exterior of The Hilt Bar, and even if you notice it, you’ll probably disregard it as a dive bar.

Doing so would be a huge mistake. Epic, even. Some Portlanders (myself included) feel compelled to describe almost everything as epic (though it really fits here, I promise).

Walk through the front door, and the Hilt Bar feels like a stylish bar with a laid-back attitude; the comfort of Southwest Portland meets the class of The Pearl. Except for the pool table and deer hunting video game in the corner which almost provide a callback to its dive-like exterior appearance, the Hilt’s low-lit interior beckons with comfortable stools and plenty of fashionable tables.

The bartender greeted us (and every other guest) immediately as we walked through the door which made me feel like a regular; a feeling I really enjoy. She was extremely friendly, conversational and deftly managed the double-duty of serving and bartending duties for what may have been an unusually busy Wednesday evening. 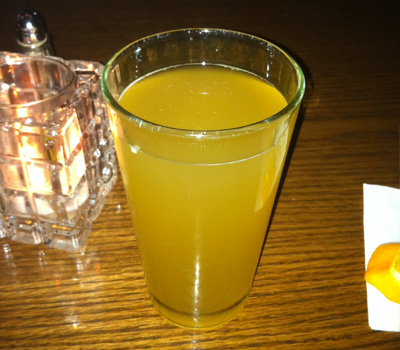 The Hilt has ten different beers on tap with one rotating draft, a number of bottled and canned beers, a decent selection of wine and some intriguing-sounding cocktails including the Sazerac and the Spaniard. Tonight, we opted for the Hoegaarden, a light white beer from Belgium. I’m not normally a fan of light beers of any kind, but the Hoegaarden isn’t your average light beer – it’s incredibly refreshing and lightly fruity (especially when served with a slice of orange). 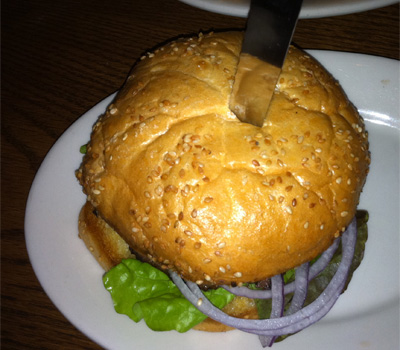 As for food, let’s start with the least exciting item we ordered – a hamburger made from locally-grown organic beef made into ground on-site at The Hilt. I kid you not – you know you’re somewhere special when a hamburger of that caliber can be described as “least” exciting. This burger was cooked perfectly – juicy and delicious to the last bite. 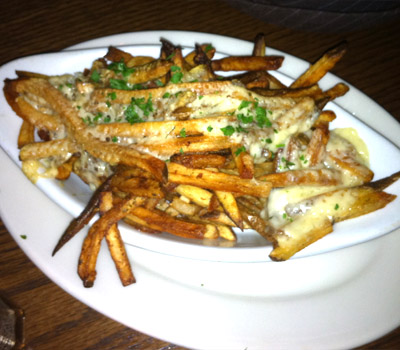 If you’ve read many of the other posts, you may have noticed that Stumped in Stumptown has a bit of an obsession with french fries. The Hilt’s hand-cut Kasseri Fries are lightly seasoned in a lemon herb and covered in Kasseri cheese. The result is tasty, crunchy and not-at-all greasy. 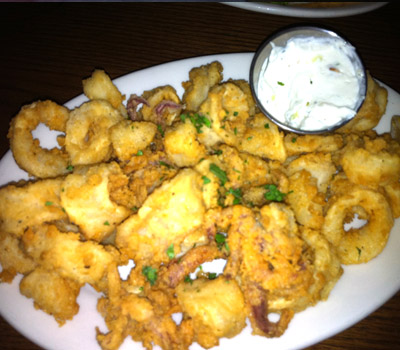 Calamari with Tzatziki Sauce at the Hilt Bar

If there was any thought that the Hilt might be a dive bar still left in our minds, the calamari blew it away. Though it may be just fried squid, calamari can be easily decimated into a fishy mess. Not so at the Hilt; truly some of the tastiest calamari in Portland with Tzatziki sauce on the side that added just enough zing to each bite. Add the fact that this was a happy hour menu item to the mix, and the Hilt’s created a true surprise. 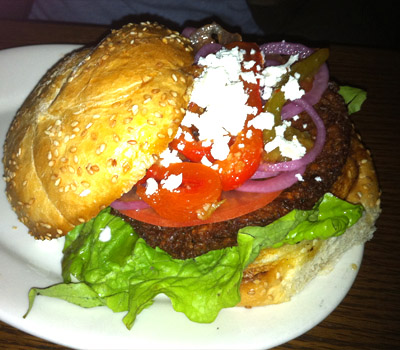 At this point, let me say that I am not a vegetarian or vegan in any way. Most of the time, I’m a self-described “meatatarian” who refuses to eat anything remotely vegetable or healthy, for that matter. The shock of the evening for me was the Roasted Zucchini and Garbanzo Bean Burger. I’ve tried many veggie-based burgers in my life, and almost all of them are limp, soggy, disgusting things that my parents’ dog who regularly snacks on poop wouldn’t dare put in his mouth for being too gross. Plus, I happen to detest zucchini for the same reasons I hate veggie burgers – limp, soggy, disgusting.

This zucchini and garbanzo bean burger was outstanding. The patty itself was cooked with just the slightest bit of snap, making it have an extra tasty crunch to eat bite. The chef then piled feta cheese (did I mention I don’t normally like feta cheese, either?) and a charred pepper salad over the top with a harissa sauce that melded all the flavors together to create true perfection. Even thinking back now, I still have a hard time believing exactly how good it was.

The Hilt Bar is one of those places that’s just so Portland in the best way – it’s understated yet outstanding and truly makes you feel like you’ve found something special. Do yourself a favor and make the effort to try it out – you won’t be disappointed.