Rock Bottom Brewery and Restaurant is a chain of brewery/restaurants … except it’s not a chain. How can this be? Each location has its own brewmaster and own special brews. In addition, they all share a menu with so much variety that it’ll make your mouth drop open (though that could also be from the beer).

You can find Rock Bottom Brewery right in the heart of downtown Portland, conveniently located for those on foot, but it can be a giant pain to find parking. Trust me, it’s worth the frustration.

In the interest of full disclosure, I first heard of Rock Bottom directly from its brewmaster, Van Havig, who, sadly, does not have a handlebar mustache and drive a 1920s Mercedes-Benz as his name made me imagine. What Van lacks in German cliche, however, he more than makes up for in mad brewing skills, having won a gold medal for his Merry Prankster brew at the Great American Brewing Festival.

In addition to a wide selection of beer, Rock Bottom features some of the greatest food I’ve had in Portland, both in terms of taste and scope – their portion sizes are not messing around. Come hungry, and leave packed full.

As a restaurant, Rock Bottom’s atmosphere presents as lively and boisterous. Don’t plan on having an quiet and intimate meal if you come here, though it’s also not a raging sports bar. The hostess and waiter were friendly and engaging, and, once again, Portland’s infamous terrible service did not raise its head.

Many Portlanders almost revel in complaining about the terrible service at restaurants, hotels, bars, stores, you name it – if it’s in Portland, it has terrible service. In fact, this reputation permeates so much of the culture, that I was concerned I’d never be able to eat out again when I moved here. Maybe I’m just lucky, or maybe Portlanders have developed a high level of impatience after getting stuck when the I-5 bridge gets drawn (soooooo slow), but I haven’t seen poor service in the years I’ve lived here. 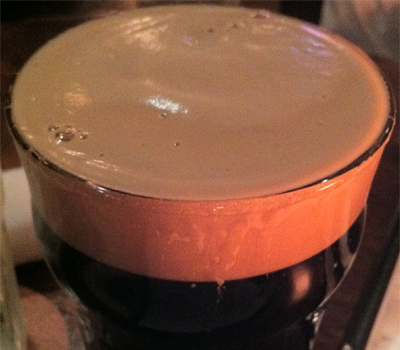 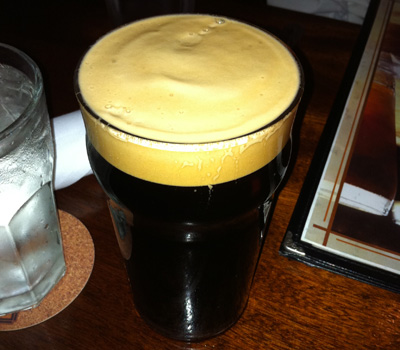 See the liquid in the glass to the left? That’s coffee! Kidding, of course, but the American Street Stout became one of the best dark beers that I’ve had in Portland. Thick, smooth and delicious – a stout that truly coats on the way down. 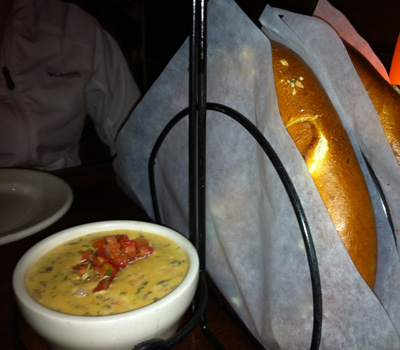 As an appetizer, we had an order of the Ball Park Pretzels. Even though the menu described the items as two “giant” pretzels, I once again made the mistake of assuming the menu-writer’s definition of “giant” was not the same as mine. Once again, I was terribly wrong. 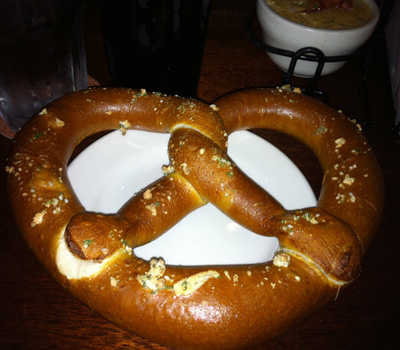 Ball Park Pretzel – It IS that big

In Rock Bottom, even the pretzels receive special beer treatment as they are “brushed with handcrafted Ale and sprinkled with fresh garlic and Kosher salt” as stated in Rock Bottom’s menu. These pretzels might be the most understated food item I’ve ever had – they were nothing short of truly astounding.

The pretzels were tender and delicious all on their own; the garlic, salt and beer made them truly the best pretzels I’ve ever had, however, what truly blew my mind was the Spicy Spinach Cheese Dip.

Truly, I’m having the hardest time coming up with words to describe the dip – it was that good. I’m not even ashamed to say that my eating partner wasn’t feeling particularly hungry, so I ate both pretzels and the cheese dip. And it was good. So good that I don’t even care how gluttonous I’m coming across right now.

(Okay, maybe I care a little bit, but it was really, really good) 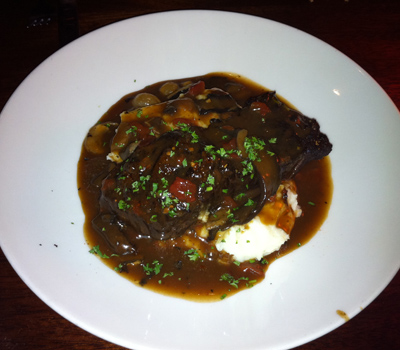 For the main course, I ordered the Overnight Braised Short Ribs. Slow-roasted, boneless and served on top of Rock Bottom’s White Cheddar Mashed Potatoes, there isn’t much to say about this dish – it was everything I wanted it to be when I ordered it. 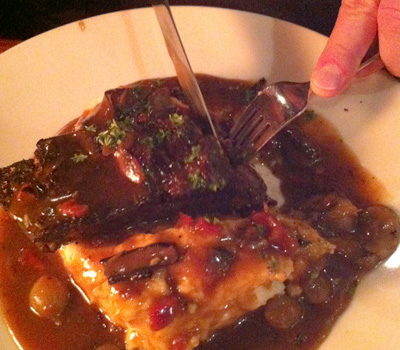 The meat was slightly sweet (in a good way) with just enough spice, and it was incredibly tender. Though the above picture shows me using a knife, I truly didn’t need to – the meat just broke apart deliciously. 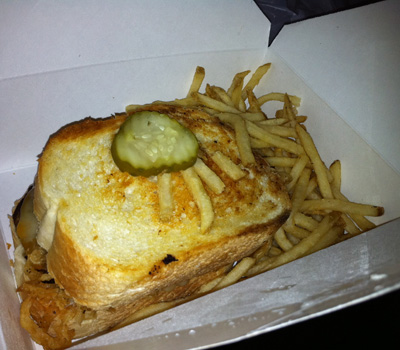 Here’s where this post gets a little odd – my companion wasn’t hungry when we sat down to eat, so we got her a Patty Melt to go meaning that this part of the post was out of the restaurant.

You might think that since they’d have to put her food in a box that Rock Bottom’s take-out might be inferior in terms of scope and size to their sit-down meals. Once again, you’d be wrong. 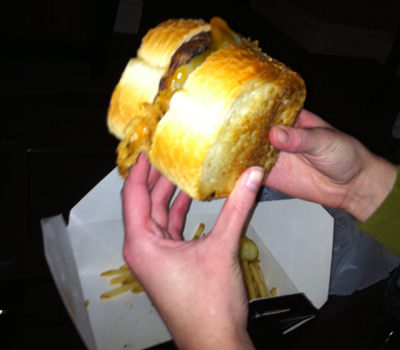 This image has not been Photoshopped in any way – the sandwich truly was that big. A Patty Melt often is very simple – a burger, swiss cheese, thousand island dressing and two slices of bread. Rock Bottom, not content to settle for just that, adds cheddar and onion straws, making the sandwich that much better.

Rock Bottom Brewery never ceased to impress from entrance to exit. The beer is phenomenal and the food excelled almost as much.