Gravy offers a wide selection of breakfast fare and sandwiches. It also happens to be located within Portland’s up-and-coming Mississippi district (so-named because of the street with the biggest main drag – N. Mississippi Avenue) smack in the middle of NoPo.

You might think that a restaurant that focuses on breakfast food is nothing new and can’t possibly be that special. I wouldn’t blame you because this is exactly how I felt when I first heard of Gravy. Then, I tried to get in on a weekend.

First lesson: be prepared to wait. Lines out the door are the norm – even in torrential downpours – and you shouldn’t be surprised to have a wait time of upwards of two hours to seat your party of four. This was my first hint that Gravy might not be your average breakfast restaurant.

Second lesson: ignore any preconceptions you might have about personal space. Gravy has a limited amount of real estate to work with, and they try to fit in as many people as possible to attempt to reduce the wait time. Cuddling up to your neighbors’ tables will give you a good eye to what they’re ordering, though.

An astute observer will notice that the amount of space dedicated to the kitchen is more than half of the restaurant space. Yes, you read that right – Gravy prioritizes the kitchen over the seating area. I never truly thought about it before, but doesn’t that make perfect sense? I would later find out that a restaurant with a larger kitchen means larger portions. 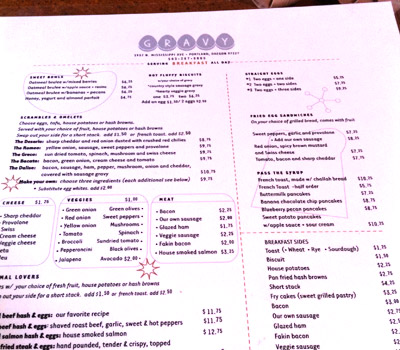 After being seated, we took a gander at the menu. Reading it over, there were a number of mouth-watering items that I wanted to try, so my eating partner and I decided to share a biscuit and gravy so we could have our own entrees. The prices, which are quite reasonable for a Portland restaurant, are deceptive – you might be expecting comparably-sized (read: small) plates of food, as we were. We were wrong. Very, very wrong. 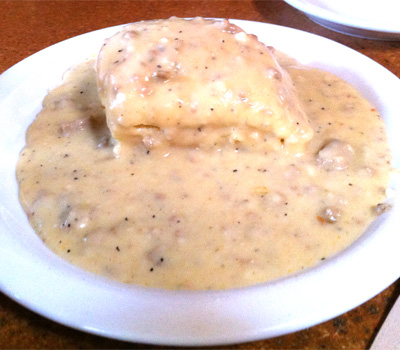 Our biscuit and gravy arrived, a giant pillowy biscuit smothered in gravy. Being meat eaters, we opted for the sausage gravy. I’ve spent many decades of my life living in the South where they take biscuits and gravy seriously – as in, schoolchildren are taught about the importance of the biscuit and gravy food group – so I’ve had a lot of different kinds of biscuits and gravy. I’m a huge fan of the food except I’ve noticed that us yankees often don’t know how to make it right.

The gravy has a wonderful slightly salty flavor (in a good way) accompanied by sausage that isn’t afraid to have just a tiny amount of spice in it. The biscuit blew me way with a bit of sweetness that would’ve made it a perfect stand-in for strawberry shortcake – just sweet enough to add real flavor without being so sweet that it would be out of place smothered in gravy. 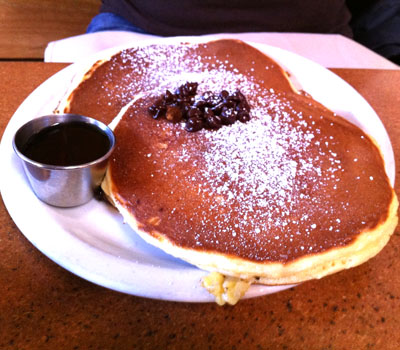 Initially, I had wanted to order the Chocolate Chip and Banana Pancakes as my entree until my friend ordered the corned beef hash with a short stack of the pancakes on the side. I opted to do the same.

A full order of pancakes will give you four so a short stack is two. In most breakfast places, a pancake checks in at the size of a bread or dessert plate. Not at Gravy. Two monstrous pancakes each the size of dinner plates were slapped on the table – a short stack of two (that could feed a family of four).

I love banana pancakes. I also love chocolate chip pancakes. Reason would state that mixing the two would be the breakfast equivalent of Reese’s Peanut Butter Cups (“Hey! You got banana in my chocolate chips…”).

These pancakes are astounding – chock full of banana and chocolate chips (the ones in the picture are just a “garnish” in Gravy’s wonderful world of breakfast). And, as you might expect, the banana and chocolate makes them super-sweet, so if you’re not one with a hankering for the sweetness, you best stand aside.

I must once again point out the sheer quantity of food that has been arriving at the table. The waitstaff should warn patrons – “Sir, you’re about to order the food equivalent of an entire rhinoceros. Are you sure you want to do that?” 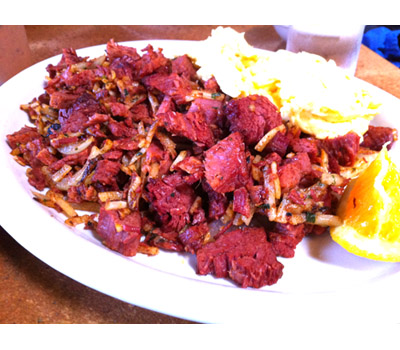 Our main entrees – the corned beef hash served with two eggs cooked any way you’d like ’em – arrived at the table – the final course in a three-course breakfast (if you’ve ever heard of such a thing). This wasn’t a plate of hash so much as it was a trough of hash.

Going into the dish open-minded will yield a better result – this thick, stick-to-your-ribs plate of hash will fill you (and your 25 nearest neighbors) to the brim with meaty goodness. The eggs were a completely unnecessary side item given the sheer magnitude of this meal, and, due to my post traumatic stress disorder from being so over-whelmed by gigantic quantities, I can’t recall my scrambled friends at all. The hash, on the other hand, was quite tasty, though I didn’t get even close to finishing it.

Gravy earns its reputation for outstanding breakfast food and then some. In addition to being reasonably priced, they don’t skimp on substance or style, ensuring that each dish brings the punch customers expect. I offer a bit of advice: bring at least one eating partner and be sure to only order one of each thing, no matter how much you think you want your own.